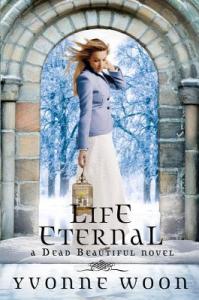 The second book in the Dead Beautiful series. And again a wonderful book. 🙂

Anyways, in this book, we still have the Undead, still the love problems, but a different setting. This time we are in Canada, Montreal. Gottfried Academy is now closed to normal students, only Undead are allowed and our lead girl goes to a special Monitor school. First she is like, no. Then she finds out Dante might be there, and she is very eager to go.

She meets new friends, makes an enemy (sheesh Clementine is really a bitch, and so jealous when someone is better then her or is just chatting in a friendly way with her boyfriend). I really disliked Clementine.

Our lead girl finds out she can speak Latin, and also some other languages while she doesn’t know what she said. She also experiences very vivid dreams and she meets up with Dante (in secret, since he is undead, and well.. Montreal is a monitor city, so if they find him it is over for him).

The book was really good, I loved the search for the Nine Sisters, Noah was nice, but I really disliked him at some points. He really doesn’t understand no, or the fact our lead girl has a boyfriend.

Also really sad to see how Dante’s and Renee relationship went, so much confusion, so much pain. If only they could be together without all the problems.

And now we have to wait for a year!! I don’t think I can wait that long though.

This site uses Akismet to reduce spam. Learn how your comment data is processed.

Sound of Sirens
by Jen Minkman
tagged:
currently-reading and omg-it-is-an-arc

Take Me On
by Katie McGarry
tagged:
currently-reading, warning-english-books, coverlove, and for-girls-…